Michael Prescott, 2-page dungeon-maker extraordinaire, put out a crowd-sourced dungeon recently called the Halls Untoward. It’s pay-what-you-want on Drive Thru RPG and it’s really good, especially his fantastic illustrations. I’m planning on running it for my 5th-graders, so as usual I’m doing some reformatting. I’ve taken the minimaps of each part of the dungeon, cut them out, stuck them in the middle of a letter-sized page, and then cut out each room description and pasted them right next to each room. The original book is already pretty easy to use thanks to the minimaps, but the larger real estate of a letter page allows for zero information loss while eliminating page flipping and allowing for immediate visualization of each room’s layout and surroundings. Check it out. 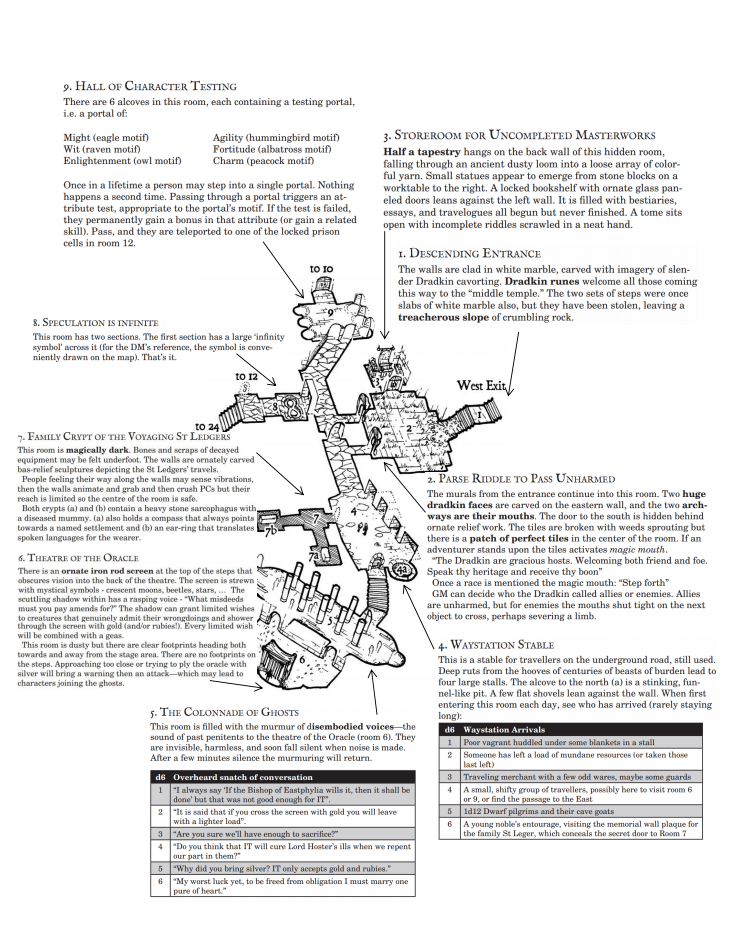 I’ve been running Maze Rats at my 5th grade after-school club for a while now, but the main problem is that it’s not very compatible with OSR monsters, spells, and mechanics in general. So what I’m looking at now is a way to make something as fast, simple and intuitive as Maze Rats that will work pretty seamlessly with my gaming bookshelf. I’m calling it Knave until I think of something better.

The first problem: how to make it classless? It needs to be classless because I don’t have time to teach each kid how a different class works every week. Things need to be as obvious as possible. My solution right now is to tie everything into encumbrance slots. You have as many slots as you have Strength, but everything that might make you more martial or more arcane are just items. (All classes lie on the martial/arcane spectrum, and don’t tell me I’ve forgotten rogues, all adventurers are rogues).

So if you want to be more of a fighter, you pick up more fighty things: better armor and weapons. Armor runs from AC 12 to 16, and takes up 1-5 encumbrance slots. Shields and helmets (+1 AC each) also take up a slot. Weapons deal d6, d8 or d10 damage and take up 1, 2 or 3 slots. So a fighter that’s really decked out for war can easily fill 8-12 slots, especially if they’re hauling around a few spare weapons.

I’ve solved the wizard problem by just making encumbrance slots the same thing as spell slots. Each spell is now a spell book that can be cast once per day, and which takes up 1 encumbrance slot. PCs can only cast spells of their level or lower (it’s always bugged the hell out of me how these don’t align in normal D&D), and PC level only goes up to 10. You never get new spell books as a result of leveling up; you have to find them like any other item, and the high level ones are incredibly rare. PCs are flatly incapable of creating or copying the spells in spell books. It’s a lost art. This way magic users have to claw their way to every scrap of magic they have, be constantly on the lookout for people trying to steal their grimoires, and have to wade into battle flipping through the mobile library they have hanging off them.

An early draft of Knave is out now for my supporters over on Patreon.